There are several different projectiles for the AT4. Note that because the AT4 is a one-shot weapon, projectiles are preloaded into the launcher tubes.[9] 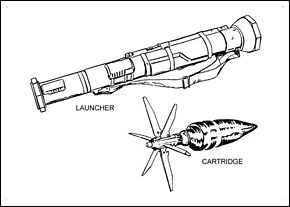 AT4 launcher and projectile.

HEAT (High Explosive Anti-Tank)
The HEAT projectile can penetrate up to 420 mm (16.5 inches) of RHA with beyond-armour effect.[18]

HEDP 502 (High Explosive Dual Purpose)[9][19]
For use against bunkers, buildings, enemy personnel in the open and light armour. The projectile can be set to detonate on impact or with a slightly delayed detonation. The heavier nose cap allows for the HEDP projectile to either penetrate light walls or windows and then explode, or be "skipped" off the ground for an airburst. For use against light armour, there is a smaller cone HEAT warhead with 150 mm (5.9 inches) of penetration against RHA.

AST (Anti Structure Tandem-warheads)
Designed for urban warfare where a projectile heavier than the HEDP AT4 is needed. This projectile combines a HEAT warhead with a shallow cone, which results in low penetration but produces a wide hole, with a follow-through high-blast warhead. It has two settings: one for destroying bunkers and one for mouse holing a building wall for combat entry.[20]

Complete AT4 HEAT antitank round (which is preloaded in AT4) and AT8 bunker-busting warhead.

HEDP 502 projectile for the LMAW.

HE (High Explosive)
High explosive anti-personnel weapon that can be set for impact or airburst detonation, with an effective range of up to 1,000 m.[21]

AT8 (Bunker-Busting)
A version of the AT4 where the standard HEAT projectile is replaced with the bunker-busting warhead developed for the SMAW. No orders were ever placed.[23]

AT12-T
In the early 1990s, there were tests of a tandem charge 120-mm version (Bofors AT 12-T) that would be able to penetrate the front armour of any modern main battle tank. However, the project was cancelled due to the dissolution of the Soviet Union and the subsequent cuts in Western defence budgets.

1.  Before renting an account must be set up either before or at checkout.

2.  Also proof of valid insurance must be presented at time of or before time of pick up.

3.  Purchases must be paid in full before pick up.

There are no exceptions to the above notes.

All prices are rental prices only.

For a single weekly rate.

For a single item.